MuleyVerse Exhibition: Muley Through The Years

In 2018, Muley the Mule and Friends hosted a show produced by Joel Chapman called "The Congo Cabaret: That's Entertainment!" to raise money for the Food Ministry of First Congo of Memphis.  As part of the show, there was a display of MuleyVerse stuff.  Here is a re-cap of that exhibit with the descriptions from the cards you see in front of the exhibited pieces in the photos. 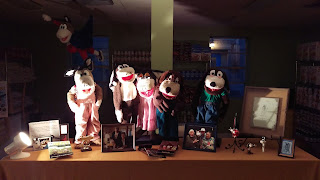 MULEY: THROUGH THE AGES EXHIBIT
Please check out this display of somewhat rare Muley memorabilia.
Then, look around behind it to the Food Pantry, which your ticket helps support tonight!
Inspired by friends and church family, the live "Muley and Friends Show" from conventions in years' past made a debut on television.  "Millionaire Magazines" explained how to help properly, while "Easter Eggheads" explained why not to eat all your candy at once, and also about the resurrection. 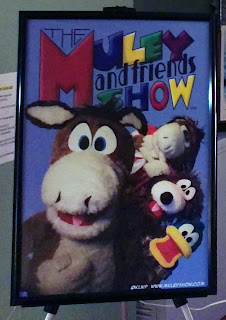 After many years of appearing at the Superman Celebration in Metropolis, IL, a decision was made to create an alter-ego for Muley, that of SuperMule!  The "M" logo is based on the shape of Muley's ears, while the suit is the reverse colors of Superman.  To great audience glee, "SuperMule and the Cookie Caper" made it's debut in Metropolis! 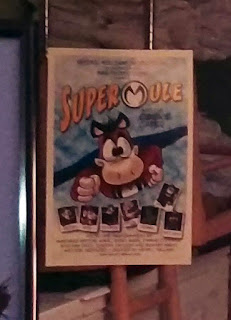 Muley is seen flying high above the Food Pantry in his SuperMule uniform, which is based on his personality: blue briefs, blue towel cape, red pajamas, and blue canvas sneakers. The uniform of all great crime fighters. 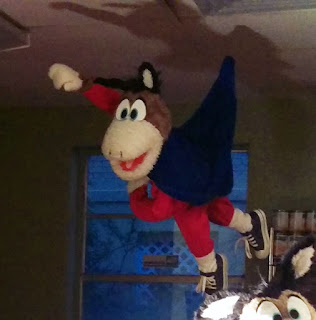 Muley version 2.5, body constructed circa 2000, an upgrade around 2002.  This version of Muley went along on a Carnival Cruise, and participated in Guest Talent Night singing "Soul Mule."  Also shown is the award he won!

ORIGINAL MULEY CAST
To coincide with his original creation date, the first Muley puppet was constructed on January 1, 1990, followed soon by Missy Mule in the same year.
Buford the Dog was originally created for a church puppet team, but was purchased and added to the MuleyVerse.  Here, you see the original, and Buford version 2.0. 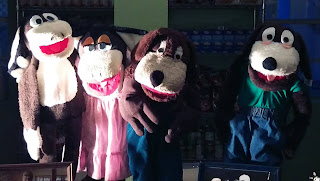 In late 1979, Kevin L. Williams created a character that, on January 1, 1980, would be named Muley the Mule.  This page is the earliest (third) drawing of Muley.  In front is a Sculpey Muley statue made in 1989. 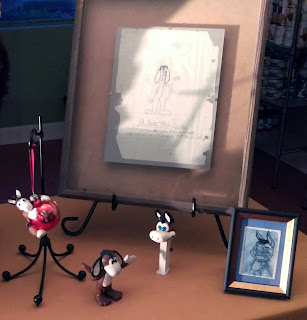 Fan art happens to be one of our greatest treasures.
A Christmas Ball by Angela Williams.
A Pez Dispenser by Lin Workman.
And a Muley Sketch Card by Missy Mule's Assistant, Janet Wade, and her son, Anakin!
Muley's original life was in comics.  Here, you see the cover of 2007's collection of "Muley's Comix and Stories"  This full color comic book collected over 30 comic strips and 3 comic stories, including Muley's biography. 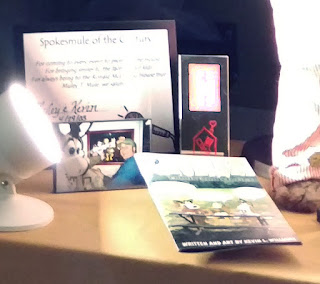 Muley's pet charity is The Ronald McDonald House of Memphis.  He has not only helped host many fund-raising events over the years, but was named the "Official Spokes-Mule."  His certificate and an award are on display here, along with a photo taken at a charity art show.
On display here are the front and back covers of a coloring book based on another highly acclaimed show, "Muley's Talent(less) Revue," which featured his friends and other characters from the MuleyVerse of puppets in their quest to win the talent revue.  Nobody won.  It was a draw. 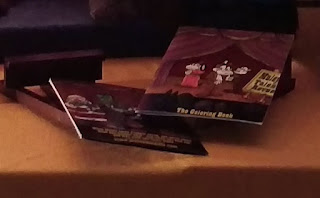 Over the years, Muley has had the opportunity to meet some heroes.  In 2008, Muley was invited to speak at the Charles M. Schulz Museum in Santa Rosa, CA where he was able to meet Jeannie Schulz, wife of "Peanuts" creator, Charles Schulz.  (Oh, yeah, Kevin was there, too.) 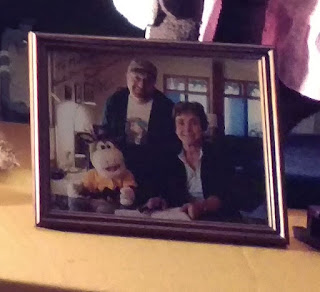 Meeting other great heroes have been a huge joy for Muley.  In this photo, from September 2015, Muley is pictured with Big Bird and Oscar the Grouch performer, Carrol Spinney, and his wife Debra.  There was a brief conversation between Muley and the spirit-voice of Big Bird.  (Oh, yeah, Kevin was there, too.) 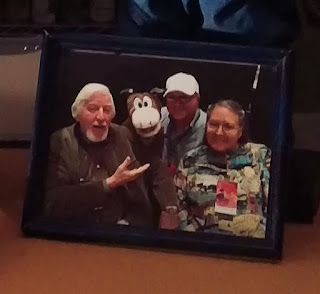 (Will post this photo when/if we find it...)
The Moanful Missy
By Mulinardo di Pinchy
Prismacolor on Black Construction Paper.
c. 1989
On Loan from the Loo Museum
Loo Loo, Skip to the Loo, My Darling.
The Art of the Process
This display exhibits the work that is done in the sequence prior to the creation of the final comic strip. The original note pad notes of the comic strip idea.  Pencils to work out the comic strip idea, and a sketch of Muley and Calvin Cow from behind.
Below, the finished comic strip, ink on bristol.

Posted by MuleyTheMule.com at 4:26 PM