Boy, I felt all wet after that one.
Posted by MuleyTheMule.com at 6:14 PM No comments:

Everybody else is doing it... 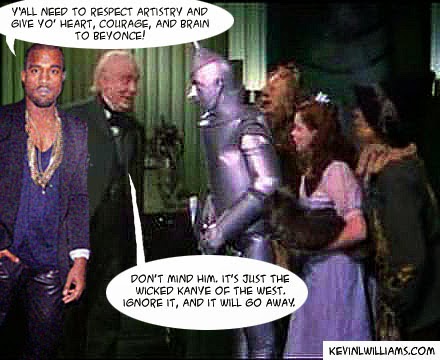 Frankly, how tasteless and rude can you be to keep hopping into someone else's spotlight?  I guess it takes a specific amount of spoiled brattiness to continue to do such a thing to different people.  However, the backlash has been hilarious and I hope to goodness this dude's run is done.  I don't even know what he's done to make him famous.


Oh, 80's, where art thou?  That's when people displayed talent and couth.
Posted by MuleyTheMule.com at 9:28 PM No comments:

There is a great series of songs by Cab Calloway based around Minnie the Moocher and Smokey Joe characters which he sings about.  Back in my college days (1990 - 1993 or so), I was a student at Northwest Mississippi Community College (which I consider one of the better colleges out there).  My friends and I had a habit of going out to this park at night where we'd get on the swings and we'd sing songs.  One of our favorites to cover was Minnie the Moocher.

I first learned about Cab Calloway and this song via The Blues Brothers movie.  As a matter of fact, most of what I learned about music as a kid was because of The Blues Brothers.  I never paid attention to anything that wasn't Muppets, Snoopy, or Disney until I saw them bouncing around on Saturday Night Live to the song Soul Man.  But, I digress...

When The Blues Brothers are supposed to perform their major fund-raiser for their childhood home and orphanage, and time needs to be bought to get them to the stage, Curtis, the old janitor of the orphanage, asks the band, "Do you know Minnie the Moocher?"

And the curtains open to a heckuva spectacular:

But, it begins much earlier in the time-line of music history than that 1980 film.

He performed it live at The Apollo:

Here is Cab Calloway in his early 80's performing in the late 80's:


Even Betty Boop got into the Minnie the Moocher act!

Posted by MuleyTheMule.com at 9:18 PM No comments: