While working as a tour guide with Historical Haunts Memphis, I learned the story about a fallen police officer who died in the building from which the tours start.  I have done some in-depth studies and plan to share those studies as updates for donors to this cause, along with scans and photos.
On February 23, 1918, Patrolmen Edward T. Broadfoot and L.C. Dowdy were dispatched to La Preferencia Café at 546 S Main Street, Memphis, TN, to investigate three men who were behaving suspiciously.  Upon entry, Officer Broadfoot noticed that there was a bag left by the door and other cases by the table of the three men.  The officers told the men they would have to submit to a search. 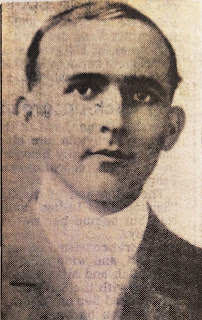 Tony Wilson from Glendora, MS, had hitched a ride with the other two men into Memphis, and submitted to the search with Officer Dowdy.  Officer Broadfoot approached the other two men at the table when John Latham stood with an automatic pistol and shot Broadfoot twice, once over his eye and once in the chest, killing him instantly.  He turned the pistol on Officer Dowdy, shooting him 4 times (he lived), and one bullet going through Dowdy’s arm and into Wilson’s lung (who died later that day).  {As a side note: Dowdy’s pistol malfunctioned and did not fire.}
Officer Broadfoot’s end of watch was at approximately 2 am.  He was buried in Memphis’ Forest Hill Cemetery Midtown, and has never had a memorial to mark his grave (and neither has his wife Maude).
This site has been set up in order to gain funding to purchase and create a monument for Patrolman Broadfoot and his wife.
Historical Haunts Tours and Investigations (where I worked on a tour and learned about the death of Broadfoot, reinforcing me to research more about his story) has offered funds, and I am working with the Memphis Police Association to gain some more funding for the marker.
The marker will be a bevel, measuring 43” wide, 12” deep, and 12” tall (beveling to 6” in front) which will make it very visible from the roadway when going to visit the grave.  Typically, this type marker is valued at $2262, but I have obtained a 20% discount making the cost $1809.60.
The cemetery has fees that are $134.16 for installation, $134.16 perpetual care, and $100 processing fee making the grand total $2177.92.
I've increased the price some in order to cover the percentage fees of this website and also other incidental costs (such as in case the cemetery fee increases, and ordering the death certificate of Maude).
I hope you who read this are able to offer some funding for Patrolman Broadfoot’s marker.
THE MARKER:  I have included my sketch of the marker which includes a 1918 badge emblem with Broadfoot's number on it.  The bevel marker is at a height and width for both Patrolman Broadfoot and his wife, Maude, so that it is noticeable from the road and easy to find.  I would love to be able to afford portraits of the couple, however I cannot locate a photo for Maude. 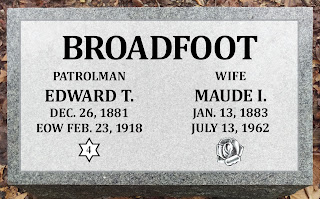 FAMILY:  Since it has been over 100 years since the death of Patrolman Broadfoot and no marker, I didn't figure any family was still around.  After doing a search through different ancestral websites, I still found no one.  IF any family members see this, I hope you will contact me and make a donation to the cause.
I will hope to have an unveiling ceremony for the monument when it is installed, and will post that information here as an update when that time comes so everyone is able to come see the memorial.
Posted by MuleyTheMule.com at 9:08 AM No comments:

On November 10, 1969, PBS and the newly formed Children's Television Workshop premiered a program that would revolutionize education and create a cultural phenomenon unmatched since!

From the show, I learned about friendship, love, diversity, death, why hating someone for having a different skin color is bad, caring for the environment, helping animals and others, and about numbers, reading, and letters.  I learned that you can be friends with someone who looks and thinks differently, and that you can even be friends with monsters (as a kid, monsters didn't scare me because Grover and Cookie were my friends, also - even a vampire).

A lot of those lessons about life have stuck with me throughout my years, and I've remembered them all.  I also know that lots of others have forgotten those lessons and I wish would go back and learn them.

Without my felt and fleece friends in feathers and fur I think my childhood would have been less fun or interesting.

I've drawn these beloved characters since I could color in the lines of Sesame Street Coloring Books (which helped fund the show), and collected them as often.

Sesame Workshop has announced their 50th Anniversary year-long celebration:
In celebrating the 50th Anniversary Season of Sesame Street, I created the image below to share with you all.  It's a quick sketch; but, one I had fun creating.  I used actual photos of the characters to sample the colors for each part of them (clothing and more), so they more closely match their real counterparts.

Of course, I have too many favorites to include in this, so from my sketch to this piece I wanted to give you a quick anniversary wish of thanks and love to the happiest street on earth.

Now, someone help me get to Sesame Street to meet Big Bird!  PLEEEEEASE! 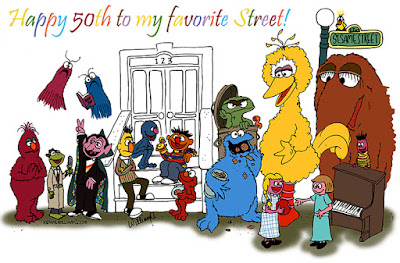 Posted by MuleyTheMule.com at 10:15 PM No comments:

We all know that Memphis weather can be weird. So,when I had the opportunity to run to the river oh, I rather drive there, to take these photos, I had to do the trip.

What's so amazing about these photos is not just the height of the river, reaching the lower Bluff of the park in Harbor Town, but the fact that while the river flowed South, the fog move north. It also crawled over the land in some parts, as of reaching out to drag someone into its swirling depths to feed the giant catfish! 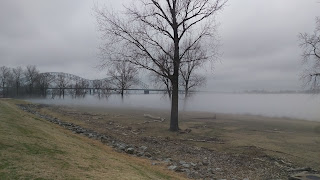 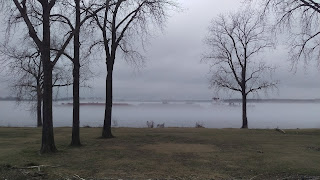 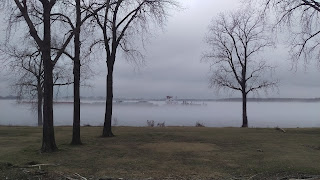 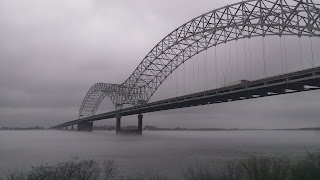 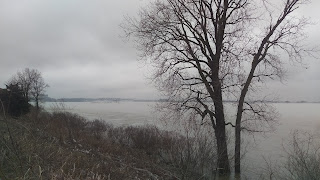 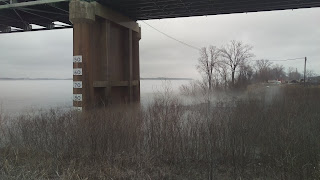 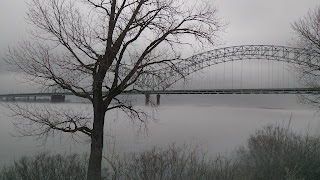 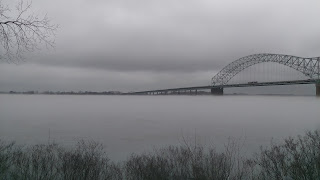 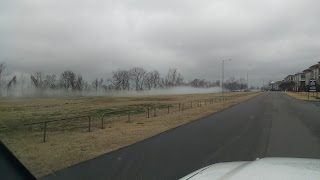 Posted by MuleyTheMule.com at 6:44 PM No comments:

Our exhibit opening is appropriately themed Victorian romance as we relive one of the most complex rituals at the Gilded Age, courtship. Spend the evening with us as we celebrate proper courting etiquette, secret languages of love, and beautiful pieces from our collections. 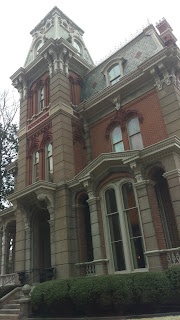 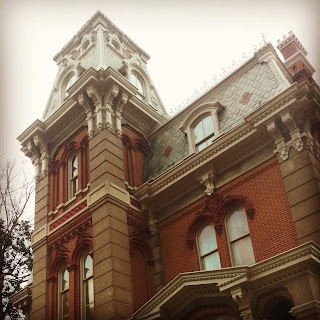 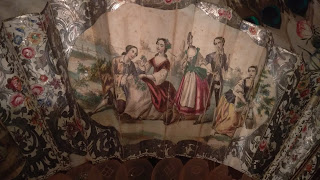 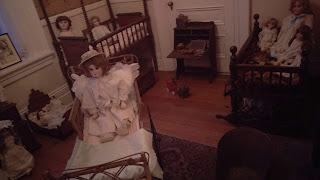 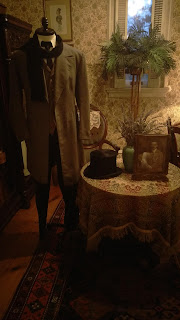 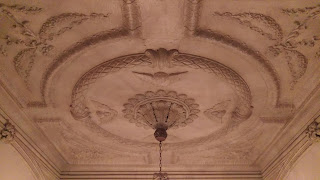 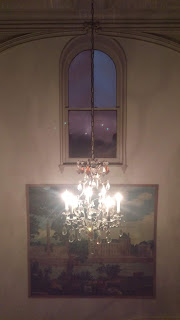 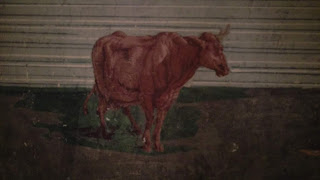 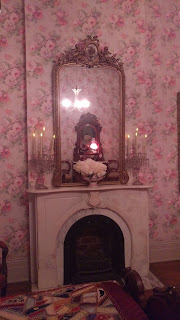 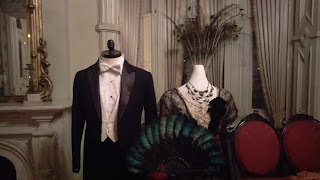 Posted by MuleyTheMule.com at 9:14 AM No comments: