Mr. Snuffleupagus - When Did They REALLY Meet Him?

Sesame Street, the greatest television show ever, started on November 10, 1969, and from its inception there were always great running gags in the story lines of the program whether it involved the adults or the Muppets.

From his first appearance on November 8, 1971, until episode 2096 on November 18, 1985, there was a running gag in which Big Bird could not get the adults on the street to meet, let alone believe in, his friend Mr. Aloysius Snuffleupagus.

Finally, according to the show, amid a funny mock of The Phil Donahue Show (who?), Big Bird was able to get the adults to meet his big, furry friend, Snuffy!  But...was this the true canon?  Was this all a part of Big Bird and Snuffy's reality along with those on Sesame Street?

Or is it just a story line cooked for the show?

You see, in 1973 Sesame Street Records released an album titled "Sesame Street Live," and as you look at the cover you see it.  There they are, all standing together! 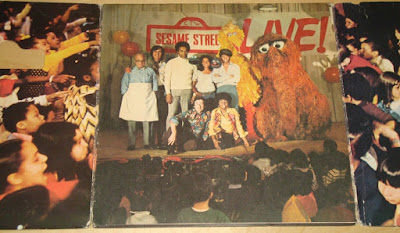 So, did they already all know each other as of 1973 or earlier and pretended not to on the show, or was there some sort of lapse in memory?  I don't know, and it doesn't matter because it's still a great show, but something I noticed that I wanted to post about.

Special thanks to those who have compiled tons of information at Muppet Wiki!
Posted by MuleyTheMule.com at 7:37 PM 3 comments:

Just some photos from the 2015 Memphis Comics and Fantasy Convention!  I had the opportunity to help promote the tours by Historical Haunts Memphis, and also spread some information to people about investigations of properties, businesses, and more, by Mid South Paranormal Society, the regional family of TAPS (The Atlantic Paranormal Society, created by the lead investigators on Ghost Hunters).

Posted by MuleyTheMule.com at 8:40 PM No comments: