Arting Around With God - Part 2 Review

Did you get a chance to read Part 1 Review of the classes?  If not, CLICK HERE!  Since the topic of the classes being reviewed is religious in nature, this is going to be a God-centric story, of course.

Part 1 Review discussed the other folks who participated in the classes held those first 3 Wednesdays of September 2014.  I shared names, stories, my thoughts, photos, art, and a poem I wrote during one of the classes, which inspired me to share two other such items below.

The third Wednesday class, hosted by Sharon Pavelda and Randall Mullins (as they had hosted the previous two), found musician Larken and vocalist Joel Chapman on the floor discussing my story, and the discussion went from true musicians to the orchestration of work that goes into performing a puppet.


Since May 2010, my puppetry has re-rooted itself back into church as Muley the Mule has begun offering up the kids' messages at First Congo while sharing his too-smart 6-year-old translations of what he reads in the Christian bible and how it relates to his own life.  Where does this start?  Why do I do it?  Where did the root of church puppetry first get planted?

This evening, I started out sharing with everyone a story that not many people there knew, not even Sharon and Randall, but they are both responsible for the fact that Muley still does the kids' messages.  I believe that God sends us answers and messages, but we have to be open minded enough to understand when we're being contacted and what we're being told. Our silent meditations or prayer, the actions of people around us, the traffic jam may be a blessing in disguise as may the closed doors of a store be (depending on our bank account)!  You see, after about a year of doing the kids' messages I had intended to go to church and let Pastor Cheryl know that I would step back and let someone else take the reigns for a while; but, God lets you know loud and clear what you're going to do.

At that point and time, I hadn't really spoken much to either Randall or Sharon, but this particular morning both stopped me just as I was walking in the door and we discussed puppetry performance, acting, techniques, and they told me that the work I was doing with Muley for the kids, and ultimately for the congregation since we perform the kids' messages right in front of them, was a true blessing to all and especially themselves.  I realized that, "Oh, okay, God.  I get what you're saying," and chose silently to not stop doing the kids' messages.  That's when they gave a farewell and walked away, and I said, "That's too coincidental to not be a sign."  So, through today, I still do the kids' messages there and expect I will continue until they tell me to go away, or I move, or just cannot physically do it any longer.

But, where did puppetry for me begin?  It was simultaneous with my love of drawing and began at a very early age.  I attended Cadet Child Care Center in Holly Springs, MS, and they promoted art with us kids creating plates, clay sculptures, we made snowmen out of white soap powder, painted, drawed...the list can go into eternity at this point!

My best friend then, who I recall was always intrigued by my drawing and would later become a fantastic musician, was Monta Richmond.  In the MuleyVerse, my namesake, Kevin Rhea, has a best friend named Monta Mitchum.  Go figure.


I was a HUGE fan of both Charles Schulz's Peanuts comic strip and cartoons, and of Jim Henson's Muppets, mostly via Sesame Street.  I began doing puppet shows for my neighborhood friends and classmates at Cadet Child Care Center.  I would take my record player and find the right groove in it to lay the needle and just as it started playing a song, would grab a puppet that goes with the record and perform the song.

Sharon asked me, "Do you remember the first puppet that you connected with?"  "Coincidentally," I said, "I brought it tonight!"  I pulled the puppet out of the puppet box and did a few lines in the character's voice, then passed it around for everyone to see and try on.


I explained that in 1979 I had already received letters from the corporate paralegals of my heroes that I could not do my own Snoopy comic strip or create my own Muppet show, and so I started creating my own world of dogs.  The main dog character was called Spike, but was really dorky unlike the usual burly strong Spikes you see in cartoons.  His buddy, originally a dog, was this lanky thing that, on January 1, 1980, Papa Roy Rhea said, "Well, he's muley-lookin', ain't he?"

"Muley-lookin'?" I asked looking at the page.  I thought it was a dog, but if Papa Roy says it's a mule, then it's a mule.  So, that's when Muley the Mule was born.  Today, I still have (and shared in that class) the earliest owned drawing of Muley, which is probably #3 or #4 drawing of him. 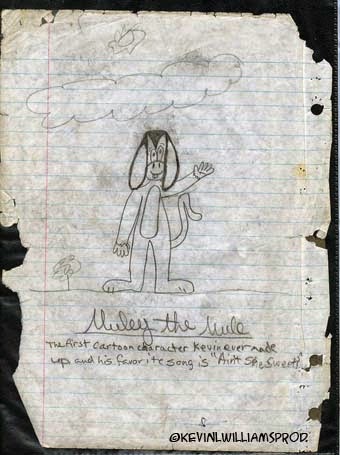 During all this time, though, I was still returning to my preschool and doing puppet shows.  I would load up a suitcase with records, the record player, and my puppets, and ride my bike all the way uptown in the summers and do puppet shows for all the students.  In 1985, the students shared their puppet experiences with the school's newsletter (you'll have to click it to open bigger for viewing): 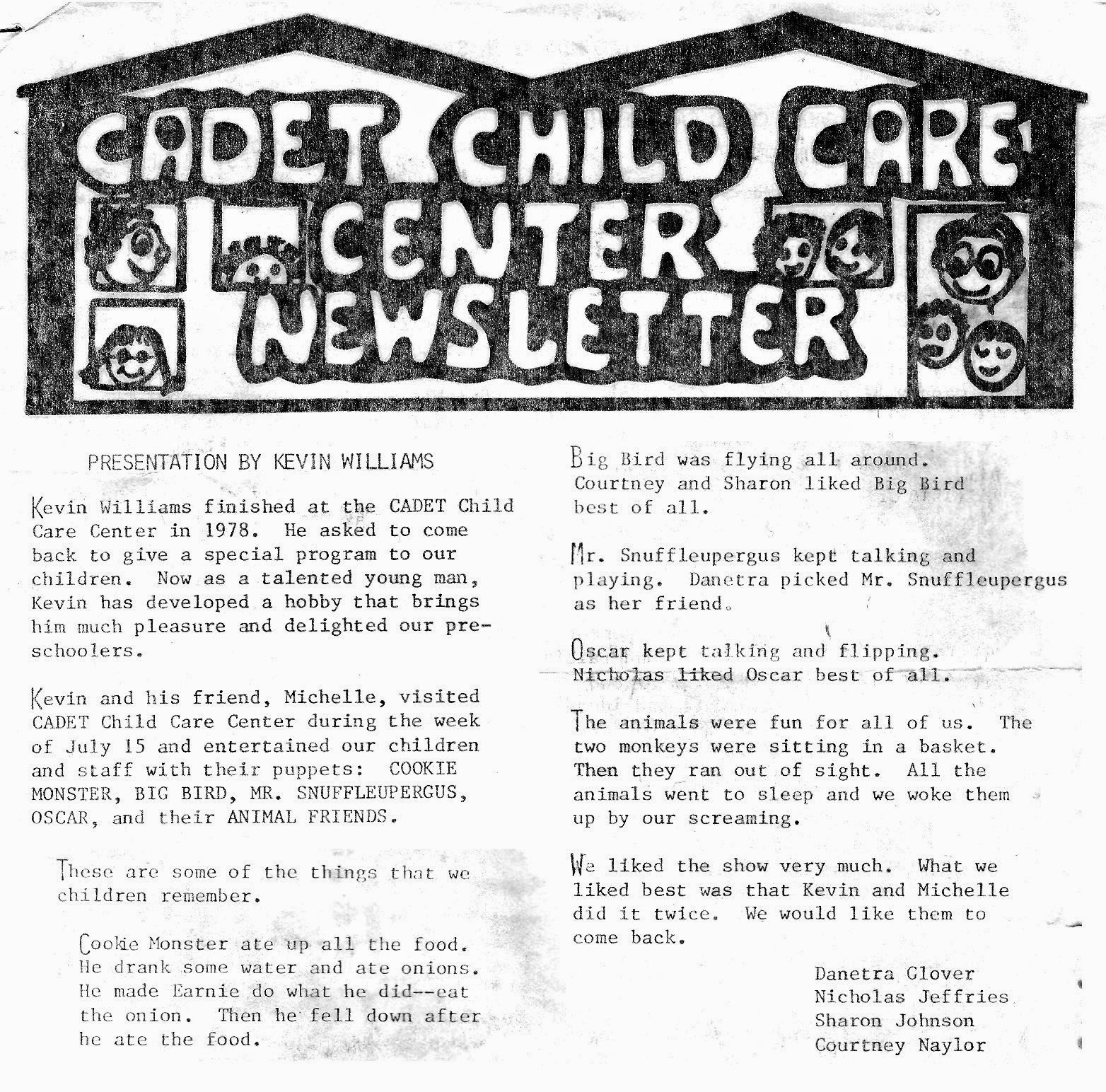 Fast forwarding now: in 1988 we moved to Munford, TN, where (after being kicked out of the Presbyterian Church for laughing at the old woman choir who sounded like the Muppet Chicken Choir) I started attending Munford Assembly of God Church.  The music that Sunday was rocking, and it drew me in there.  Soon after, I started with the youth group and then performing puppets with the Children's Church there. 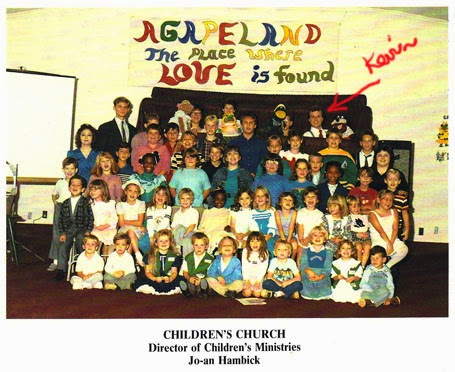 This inspired me to go ahead and (in May 1990) construct the first Muley puppet.  The pattern was taken from one of the first puppets made for the church by one of their elder women which, after I altered it (a LOT) became Buford the Dog.  I bought the puppet from the church in 1991 and made him my own completely, fitting him into the MuleyVerse as Muley's best friend.  Unfortunately, I quit church after seeing too many politics happening and decided that if I go to church I'm only adding one more hypocrite to the bunch.  But, watch what happens years later...

Everyone knows that over the following years, The Muley and Friends Show performed at festivals, conventions, and other events, with Muley hosting and emceeing contests, events, shows, and introducing stars in all forms of media, except motion pictures!  Muley's Comix and Stories have been published in all forms of print as well.

In 2009, my friend Angela Freeman forced me back to church when she says, "I heard about this church I want to try out, I'll be there to get you in 10 minutes."  In May 2010, Muley did his first kids' message with Juan Salter.  In 2013, The Muley and Friends Show performed live as part of First Congo's 150th Anniversary Celebration, also celebrating 25 years of Pastor Cheryl's tenure and 5 years of Pastor Sonia's service.

So, there is the story that made its way full circle, ending with everyone making their own paper puppets!  And this may be a neat project to share at a future date.

Thanks for sharing this story with me and I hope you had fun and are inspired by all this to go create!


Below are the poems I mentioned in the previous post and above.
First up is Industry.  I wrote it thinking about nature, but people have found many more meanings behind the text, and I welcome that.  When you read it, what do you think it is about?
INDUSTRY
There it was before me
This thing of beauty
Stretching tall to the sky
Reaching for the sun
Rooted in the firmament
And older than any
Its arms reaching out
Its foliage greeny
Against the pale blue sky
And the fluffy white clouds
Its brown leg broke forth from
The green and flowered blanket beneath
Amidst its torso was home
To the many creatures there
Living peacefully, happily
But then, from nowhere!
I heard the sound of industry
Coming like the beast of evil
Crawling across the ground
Like a serpent for a baby
And this great, majestic creature
Whose purpose in life was to shade and shelter
Was targeted, and fell
And was there no more.
Displaced, the creatures had to leave
Seeking a new home far, far away
And where once stood the majesty
Now clumped hard rock, concrete
Steel and beam, metal, glass and plastic,
A necessary evil: Progress was his name
He laughed a hearty ‘Ho, ha haa!’
As his pockets filled and fat he became
So long, I whispered to that thing of beauty
No longer reaching to the sky
For now a concrete demon came
And made the beauty die
What will become of our green earth
If progress presses forth?
Steel and beam, metal, glass and plastic,
Beauty will be no more.
While working on Muley stuff, I realized that The Muppets have a ballad with "Rainbow Connection," and Disney has "When You Wish Upon A Star," and Peanuts have "Happiness Is..."; but, I had nothing.  The following is the lyrics I wrote for what would be the ballad for The Muley and Friends Show:
The Smiles of Children
It’s found in The Smiles of Children
Their sounds of laughter
Singing their songs
It’s found in The Smiles of Children
While they play their
Games all day long
When the world turns dark and gray and
Things seem to crash all around you
Watch the children, hear their voices
Your day will start fresh and new
It’s found in The Smiles of Children
Healthy or Sick
They’re happy just the same
It’s found in The Smiles of Children
Eternal joy is the name of their game
When your heart is feeling down
Listen to the world that’s all around you
Look to the child and your happiest moments
Are when he gets love from you
Its found in The Smiles of Children
It’s up to you, so treat them right
Like you need The Smiles of Children
They need your love
Both day and night
The children need your loving, caring
Honesty and joy
And always smile back
For every girl and boy
Posted by MuleyTheMule.com at 11:00 AM